Tel Hadid is an isolated hill, 147 m above sea level south of the Naḥal (Hebrew for ‘seasonal stream’) Natuf, a tributary of Naḥal Ayalon. It is centrally located some 15 km southeast of Tel Aviv and 25 km northwest of Jerusalem: a visitor to Tel Hadid observes the Lydda Valley to the south and the west; the entire Tel Aviv Metropolitan Area is spread further westwards and northwards; and the al-Jib Plateau is seen to the east and the rolling hills of Samaria/Jibāl Nāblus are further to the northeast. 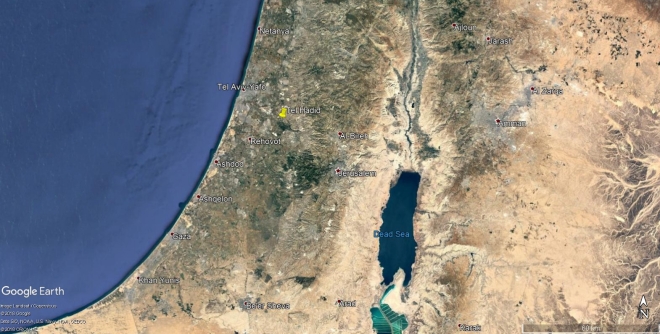 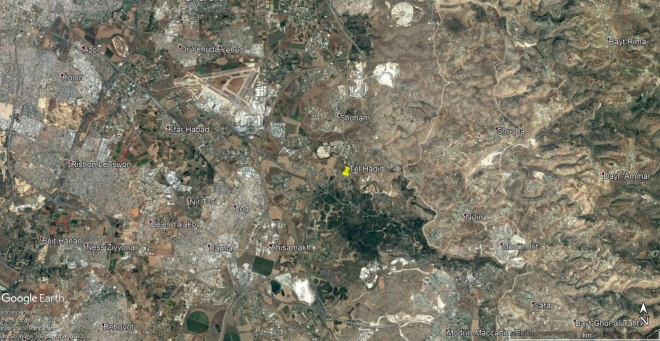 The local rock in this area is chalk covered by Nari (hard limestone) crust. Accelerated processes of chalk decay created many natural caves and fallen debris, commonly found in various locations at the site. Most of Tel Hadid is currently covered by olive plantations, which had been cultivated by the inhabitants of village al-Haditha, and by pine trees, which were planted by the Jewish National Fund. Remains of houses and the cemetery of al-Haditha are still noticeable on the ground.

Identification and Early History of Hadid

During early scholarship, led by Church Fathers such as Eusebius (260/265–339/340 CE), Haditha (Greek: Άδιθά or Aδιθα) was identified as the site of Adithaim, a town in the allotment of Judah (Joshua 15:36). Similarly, the famous Madaba Map (part of a mosaic floor from sixth century CE church of Saint George at Madaba, Jordan), features a village west of Jerusalem with the caption Adiathim that is now Aditha. But Adithaim is to be sought in the Judean Shephelah, further south of the Lydda Valley, and it is clear that the similarity in the sounds of the toponym was behind this confusion. Indeed, a different identification of Haditha suggested centuries later since was subsequently followed in scholarship. A 13th century Jewish scholar named Isaac HaKohen Ben Moses (1280–1355 CE), better known by his pen name, Ishtori Haparchi, traveled seven years across the Holy Land and documented his insights on the local topography and toponomy in his book Kaftor Vaferach (Hebrew: כפתור ופרח‎; literally “Button and Flower”). There he wrote that the village of Haditha (Hebrew חדתא), located on top of a round hill two hours walk east of Lydda, is the place of Biblical Hadid.

Written sources tell us about the history of Hadid during the Persian, Hellenistic, and early Roman Periods. It is first mentioned in the books of Ezra and Nehemiah among the towns settled by those returning from the Babylonian exile (Ezra 2:33; Nehemiah 7:37, 11:34). According to the First Book of Maccabees (12:38, 13:13), Hadid (Greek: Αδιδα) was fortified by Simon Maccabeus (died 135 BCE) during the war with Diodotus Tryphon. The battle between those armies took place in the valley it overlooks. The strategic importance of Hadid was maintained for generations. According to Josephus (Wars 4, 9:1), the Roman general (and later Caesar) Vespasian (9–79 CE), who led the legions against the Jewish rebels, decided to block the ways leading to Jerusalem and chose to fortify Hadid (Άδδιδά). Lastly, a rabbinical tradition (Mishna, Arakhin 9:6) claims that Hadid was among the towns fortified during the days of Joshua.